Court Status: Tis the season to be jolly and ATA has good reason to celebrate. On Dec. 9th the $475,000 funding for tennis courts was restored to Alamogordo. This happened through a “request for exemption” by the city manager, and much work and support from others. Special thanks to Terry Marquardt; Mark Roath, city manager; Ron Griggs, mayor; Representative Nate Cote; and especially to our president, John White. We look forward to seeing things change at the Oregon courts soon!!!

Jan. 6: ATA Board meeting at noon; all members welcome.

Expect February Play Day to be cancelled due to court construction 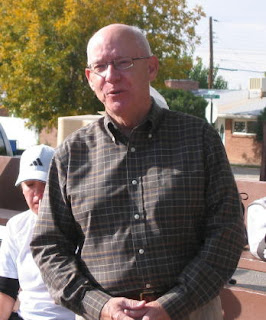 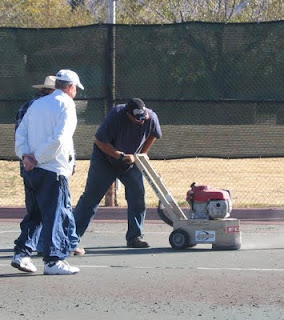 City grinding court one; plans were to use this as the trial court before patching

Membership Dues are Due in January. Annual dues remain inexpensive at $15/singles and $29/family. Dues can be given to Neil Bottger or any board member or mailed to ATA, PO Box 684, Alamogordo, NM 88311.

Battle of the Clubs is being hosted again by Picacho Hills Tennis Assoc. in Las Cruces. Scheduled for Jan 28-31 the event promises good food, door prizes, and raffles. Teams consist of 8 players: 4 men and 4 women. It has been suggested that ATA try to send a 3.0 team and a 3.5 team this year. (Our 3.5 team won its division last year). Entry costs $320/team ($40/person) which includes a breakfast and box lunch. Get your entries in to Darrell Latham as soon as possible or call him for more information. He will place players on teams on a first come/first serve basis; his deadline for our entries is Jan. 15. 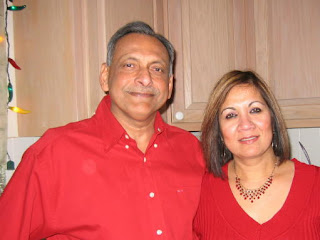 ATA Christmas Party was another blast. Good food and lots of laughs with Sintra’s tacky gift exchange is becoming quite a tradition. Thanks to Sintra and Ruthven Sampath for hosting this party again. 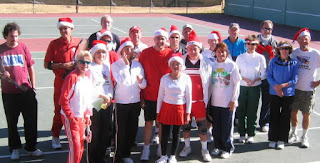 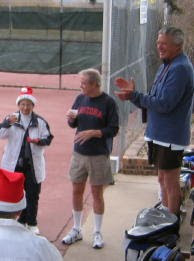 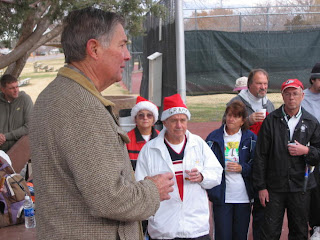 December Play Day on Dec. 12th was well attended with 7 courts of festive players coming out to play. Ed Cole, city commissioner, came and addressed ATA members and celebrated with a toast to the new courts. A team format resulted in the “quail team” consisting of Ken Smith, Robert Meints, Harold Waggoner, and Dave Bolin turned up high scorers, with Ken Smith with the high score for the day. Thanks to the Gentas for hosting and to Sotaks, Anke Witak, and Dale Emmert for helping with snacks.

No newsletter in Jan. Jan. and Feb. newsletters will be combined and out in Feb.