Court Status: On June 12 ATA new court committee members (Steve, Grady and Linda) met with Ed Balderama, development project leader, regarding plans for the Oregon courts.
First the good news. We will have courts, however this is City priority number three behind the ninth street bridge and the water treatment plant so it will be fall before it goes out for bid. We will have the old courts until at least Nov 1. This means no interference with the fall tournament or the middle school program. The courts will be laid on top of the old and as a consequence transitions will have to be made on courts 1-4 where you exit, which means the bleachers will have to be brought up to ADA standards (no cost estimate). In an effort to defray costs the City will tear down the old fence and do as much prep work as possible. The City is not allowed to charge any of their expense against the grant money. All of this will be bid in an ala carte way to allow us to go as far down the list as $475,000 will take us. Priorities are:
1. Eight courts rebuilt in post tension concrete.
2. New fencing, the posts will be a total loss as they are set in concrete but the cross pieces and fabric have some value (reuse any of the old that is in good shape)
3. On the Oregon street side of courts 5-8 cut away the fence between light poles, about 60', move the bleachers into that gap. Similar to what we have now on courts 1-4.
4. Widen courts 5-8 by 10' to allow 24' between courts, this would leave the possibility of a low fence between courts, also means relocating the 4 eastern light posts. Courts 1-4 can not be widened because of parking on one side and water/sewer lines on the other.
5. New lights.
6. Shade over the on court benches.
7. A lockable storage building for all our stuff. Tom Springer has a lead on two 10 x 20 buildings from the Forest Service.
8. A concrete pad to be used by the tournament Directors so they don't have to stand in mud. Submitted by Steve Schuster, ATA president

ON THE CALENDAR:
August 1: Don’t miss Aug. Play Day, hosted by Marita & Robert Meints at 9:00. Robert has an INTERNATIONAL play day planned. Tennis will be followed by Bratwurst and German Potato salad lunch at their home. Their pool will be open and ready to use so bring your swim suit.
Aug. 5: ATA Board meeting at noon; all members welcome

Las Cruces Exchange in Las Cruces on June 27th was geat fun for the sixteen ATA players who attended. LCTPA provided lunch. ATA won lots of door prizes, but unfortunately Las Cruces players prevailed and took the trophy. Current record now is:
ATA-11, LCTPA 11, so next year will be a tie breaker. 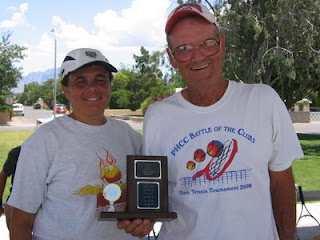 Also thanks to Joy and Darryl Gallant for hosting an ATA swim/dinner/karaoke party. If you’ve not been to a party at the Gallant’s, you don’t know what you’re missing. ATA members like to “ham it up” and their karaoke provides a stage for everyone. With Joy’s cooking and Darryl singing Elvis, this was a party to remember. 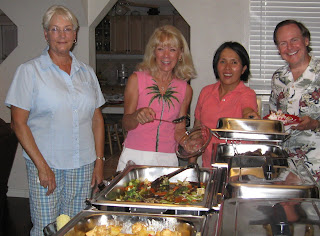 Mid School Tennis program is planned again this fall. ATA will team with NMUS-A again to offer a middle school tennis program from Aug. 25th to Oct 1st with instruction for the first 3-4 weeks and organized play to follow. Sessions will be on Tues. & Thurs. from 5:00-6:30. Carl Jones has volunteered to be the lead instructor. ATA volunteers will be needed, so if you are interested in donating some time to youth tennis in Alamogordo, please give your name to either Carl Jones or Evelyn Genta by Aug. 20th. Carl will offer a training session for volunteer coaches and helpers on Sat. Aug. 22nd. Interested mid school players can sign up with NMSU-A community ed. Ph. 439-3842. Cost to students will be only $40 which includes a t-shirt.

ATA DVD’s are still available for purchase. This DVD is a superb presentation of ATA history and activities. Thanks to Harold Waggoner for putting this together. It’s a real buy for only $5. See Neil Bottger if you are interested in purchasing one.


Ladies: Are you interested in a singles ladder?? If enough ladies express interest, a ladder may be organized beginning in Aug. Give your name to either Bernice McRae or Evelyn Genta by the end of July if interested.

Don’t forget about the ATA web site!! http://alamogordotennis.blogspot.com/
.
Posted by ATA at 2:06 PM