This September Janet Santackas' 55 and over Women's Double's Team came in 2nd at Sectionals which were held in El Paso.
The 40 and over Mixed Doubles Team which Sintra Sampath played on took 2nd at their Sectionals held this past weekend in Tucson. Lot's of great tennis. CONGRATULATIONS to both teams.
League tennis can be so much fun, if interested, contact Janet.

In October, Janet and Gail are headed to Natoinals in Oklahoma City, this is their 40 and over team captained by Jacquie Porter of Las Cruces and Co-Captain Janet. Wishing them lots of fun and tons of good luck.

Remember to register for the October tournament, it's a big one 45 years. Tournament ID 750000619

Evelyn and Janet's Kidz club is still going strong.  We thank the ATA for supporting this. 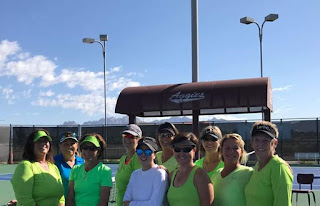