Congratulations to Gail, Diane, Janet & Joe for their ladies and men's 55 and over teams won their division and made it to Sectionals for the Southwest, held this past weekend in El Paso. I was fortunate enough to see tons of great tennis played by our folks as well as others. Next weekend Gail, Joe & Janet are off to Tucson for another Sectional's event, their 40 and over Mixed won their divisions. We also ran into a former ATA member at this event. Nice catching up with Laurie Frappier. 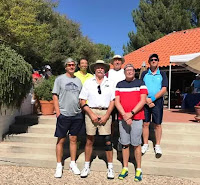