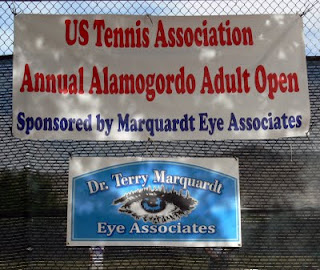 Rick Alarcon of El Paso defeated Cameron Brace-Emmert of Alamogordo 6-3 6-2 in the men's open final of the Alamogordo Tennis Association tennis tournament this past weekend. It was high quality, hard-hitting match and very much appreciated by the spectators.

Tournament director Grady Nicholson expressed his gratitude to Dr. Terry Marquardt, the event sponsor and all others who helped this year.

That was just a small part of the action of the tournament, however, since a total of twenty-four different competitions took place, some based on age category and others on skill level.

Here are some more scores from the event:

In the women's open, Laurie Frappier won the round robin competition, with Victoria Griffith second.


The following are the age finals results:

Mixed Doubles 65 round robin competition was won by Duane and Victoria Griffith.

The mixed 3.5 doubles was won by John Genta and Anke Witak over Tisdale and Waggoner.