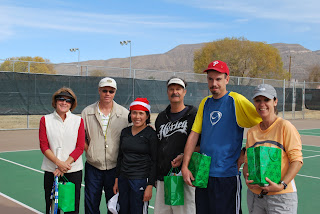 Anke wrote the following about the December play day:

A lot of people showed up today, we played on 6 courts, and the weather was great.
Everybody played two sets, and after that the 2 women and 2 men with the highest score played together. John Genta and Gail played against Cameron and Laurie.
Cameron and Laurie won, and John and Gail took the 2. place.
Posted by ATA at 5:30 PM