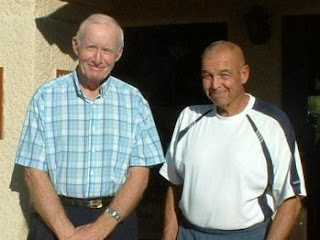 Jim Crouse and Tom Springer recently captured gold medals at the National Senior Games in the men's 75 division. The tournament, which brought together seniors from across the nation, was held at the Taube Tennis Center in San Francisco, August 11-14.

Crouse and Springer barely made it out of the opening round, squeaking past Washington's Jim Gard and Bruce Randall in a tight three-setter. Three matches later, the New Mexico duo saw themselves in the final opposite Hawaiian duo Benny Quiseng and Norberto Baysa. Crouse and Springer saved their best match for the final, and cruised to a 6-2, 6-1 victory for the title.

It was a good weekend for Springer, who also captured the Men's 75 singles crown. He received an injury walkover in the first round, then breezed through four more rounds, including a 6-3, 6-3 victory over Roger Hing (Fountain Valley, Calif.) in the final.