Court Status:
A critical city bond election was held on March 10th. Question 3 which would have provided funds for rebuilding the Oregon courts was defeated with 975 voting for, and 1361 against. After the defeat, tennis players met with city officials and asked them to again review the parameters of the capital outlay funds. It appears that the wording can be construed to allow building the tennis complex at the current Oregon tennis court site.
Special thanks to city official Maureen Schmittle, and to the ATA members who met with the city.

ON THE CALENDAR:
April 18-19: ATA Spring tourney; this year is the 35th year ATA has conducted this USTA sanctioned event. (No April play day) Registrations and dinner RSVP’s are being accepted now
May 2: May Play Day, hosted by???
May 6: ATA Board meeting at noon; all members welcome

ATA roster is being updated and will be attached with Apr. or May newsletter. Please double check your information and let Evelyn or Neil know if anything is incorrect.

High School Scholarship: High School Seniors interested in applying for the 2009 ATA scholarship need to submit a short essay to the ATA Scholarship Committee. This will be due by April 15th and can be turned into the High School counselor’s office. Contact Linda Gilliland or Neil Bottger for more information.

Grady and Nell ran the high school tournament again this year on March 6th. Seven high schools participated with Hobbs and Silver City sharing 1st and 2nd, with Alamogordo taking 3rd. Thanks to all who came out to lend a hand. 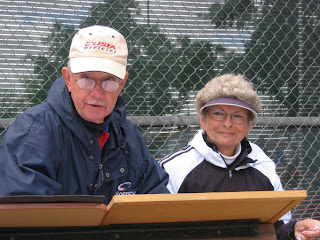 Grady & Nell at the HS tournament board 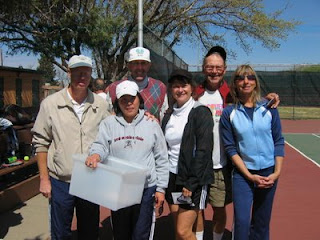 
Volunteers Needed:
Court repairs: Upcoming work days will be scheduled to patch and fill cracks on courts in preparation for the ATA tourney on April 18. Watch for emails on this.

35th Tourney: ATA board and committee members have been working hard in preparation for this special tournament. You should have already received your entry forms and your dinner invitation. Early registrations and RSVPs would be appreciated.
Also special donations (prizes or funds) are welcome.

Roswell/ATA Exchange—March 21st
Eighteen players from Roswell joined ATA players for the first bi-annual Alamogordo/Roswell Exchange which included ladies, means, and mixed doubles. When all was said and done, the match scores were 8 to 8, so games were counted. Games results totaled 154 for Alamogordo, and 153 for Roswell. It just doesn’t get any closer than that! Special thanks to Harold Waggoner who designed and arranged for the traveling trophy, which ATA keeps until the next exchange in the fall when Roswell will host in their attempt to win back the trophy. Thanks to Steve Schuster and Terry Cleveland for their efforts in organizing this event.