Court Status:
A critical city bond election is scheduled for March 10th. Question 3 involves “quality of life projects” which includes monies to rebuild the existing Oregon courts. If this bond does NOT pass, the courts will continue to deteriorate, with no foreseeable monies available for this purpose. In order to vote you must live within the city limits and be a registered voter. There are provisions for voting if you live out of the city limits and own property in the city limits, and for early and absentee voting with some deadlines as early as Feb. 23. Call city hall at 439-4205 for more information. Encourage your friends, neighbors, and any interested persons to vote FOR question 3 on March 10th!!!

ATA WINS Battle of the Clubs, Jan 23 and 24th in Las Cruces. Our ATA team played in the 3.5 team section, composed of six teams, each team playing five matches totaling 30 sets. All nine team members played in every match. ATA scored 148 games while team Cheema won 145 for second place. Winners received etched wine glasses (with the wine!) and a trophy which will be engraved and kept at Picacho Hills. 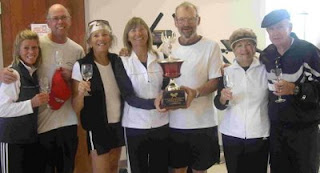 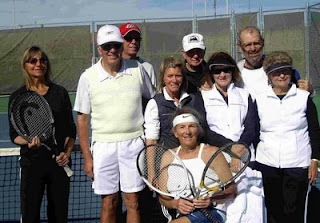 
Dues are Due in January! $15/single and $29/family still remains a terrific bargain. Dues can be given to Neil Bottger or any board member or mailed to ATA, PO Box 684, Alamogordo, NM 88310. Get these in by March 31st to avoid a $5 late fee and get your name on the ATA roster (out in April).

High School Scholarship: High School Seniors interested in applying for the 2009 ATA scholarship need to submit a short essay to the ATA Scholarship Committee. This will be due by April15th and can be turned into the High School counselor’s office. Contact Linda Gilliland or Neil Bottger for more information.
Volunteers Needed: There are several upcoming items that need volunteers:
Court repairs: Upcoming work days will be scheduled to patch and fill cracks on courts in preparation for the High School tournament on March 7, and the ATA tourney on April 18. Watch for emails on this.
High School Tournament: Adults will be needed again to transport players to other sites and to help with the tournament. Contact Grady if you are able to lend a hand on Mar. 7.
35th Tourney: Pien Latham is heading up a committee to plan a special dinner event and special prizes for the spring tourney on April 18-19. Contact her if you have some time and ideas to help make this a very memorable event.

Play Days:
January Play Day was hosted by Pien and Darrell Latham. Three courts of players showed up for a morning of beautiful weather and good tennis. Steve Schuster and Joy Gallent were the winners and Paul Sanders and Sabine Fahl came in 2nd place. Thanks Pien and Darrell!
Ladies Play Day: Despite colder weather, five lady players from Ruidoso joined ATA ladies on Jan. 28th for some good tennis. We look forward to doing this again!
February Play Day was hosted by Sabine and Wolfgang Fahl. 26 players turned out to enjoy nice weather, good food, and great tennis. Thanks Sabine and Wolfgang!

Tennis training: Sabine Fahl, Gail Richardson, Steve Schuster, Linda Gilliland, Carl Jones, and Pien and Darrell Latham attended tennis training on Jan. 11th in El Paso.
Jack Michalko conducted the clinig. He runs the USPTA in the Southwest and is one of the top pros in the southwest.

Do You Know:
Faye Stokes, Roswell volunteer and ATA member, has been named as the 2008 USTA Southwest Community Tennis Volunteer of the year! Congratulations Faye!!!

Adios John Mangimeli, long time ATA member, February Play Day Crowd! Thanks to Wolfgang who is retiring and moving to Arizona! And Sabine! Lots of winners! 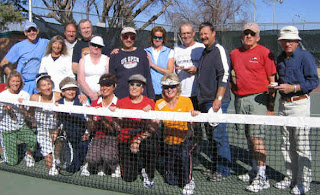 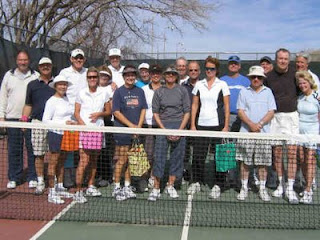